There is a 25% short interest that means 25% of the outstanding shares have people borrowing stock just to sell it. Any good news and this stock goes up. Those people need to buy.

What we think is in anticipation of Model 3 news which should come in Q3 and Q4, bulls are going to get excited and force some of that 25% short interest to buy back their shares (which is called “cover”). So over the near term, just on the excitement of the new Model 3 launch, the stock should move up as investors get excited.

(Join us as we walk through some quick thinking on Tesla in the below video.)

Model 3, What’s Up With All The Hype?

First of all, anything Elon Musk does can’t be considered hype. He’s delivered big wins in his life from creating Tesla to helping create and sell Paypal to winning NASA contracts sending rockets into outer space. He demands attention and gets it because he deserves it; he’s been a success.

Now for the model 3. The Model 3 hype is also deserved-hype. The model 3 has been reported to have over 400,000 orders. Based on last earnings call we think the number has moved up considerably from there.

Let’s focus on the “hype.” The company plans to sell 100,000 Model S and X combined this year. They have an additional 400,000 Model 3 orders. If any of that comes to fruition, we are far from hype. That new product is 4-times the size of this year’s current S and X business. Those are orders in Tesla’s hands. They’ve said also that they can produce 500,000 units in 2018. That’s what the stock’s riding on.

You're Musk, ok? You have a business. You sold 100,000 units. You have orders now for an additional 400,000 units of your new product. You’re the business man? Are you running around in excitement or depressed and shorting your own company’s stock? Which is it? We think you’d be running around naked-happy! That’s the hype. It’s not so hypey.

[Elazar, C’mon. That makes no sense, how can you be OK with a miss, you are too sold on this this guy Musk.]

No really it’s OK. The company has missed many quarterly earnings numbers and the stock (like SpaceX) has still been a rocket ship.

In fact the miss in Q2 could be buyers skipping on the "old" model because they are too excited about getting their hands on the hyped-up Model 3.

Mr. Musk even said that their buyers were getting confused that the Model 3 was an upgrade. The weakness in Q2 doesn’t tell you weakness. If anything it tells you strength to come. People are holding off to buy the Model 3.

Again, Model 3 is all that really matters for Tesla’s stock this year. The short selling don’t believe Tesla will ramp production to benefit from those 400,000 orders. Or shorts think if Tesla does build production they’ll do it at much higher costs hurting profits.

So again, all we need to really really (2-x really) care about this year is the Model 3 production ramp. The orders are there. If they can get the production there are going to be a ton of achey, sorry shorts.

Being an analyst though is getting tougher or easier depending on how you look at it.  Tesla didn’t tell you much in their press release earlier this week about the Model 3. But Musk did tell you a lot on Twitter July 2nd. 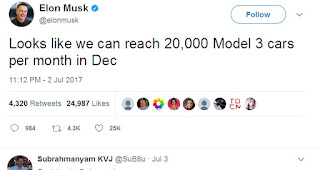 Wait a minute, that is a step up. On their earnings in May they said they’ll reach 5,000 per week at some point this year which could have meant the last week in December.

His confidence showed through on that one little tweet.

In early April at around $300 we said Tesla could go to $400. We showed based on the math how we got there.

We’re keeping that $400 target but our earnings for 2018 go from $11 to around $8 but we’re raising our PE to 50x next year. (See our earnings model here). We’re raising the PE because we think those short selling get smoked ahead of Model 3 anticipation.

Unless we get so much more conviction that the production ramp happens we think $400 is a very strong target price over the next 12 months especially before any major ramp-up in production actually takes place.

Look, Musk made a rocket company out of thin air. He is a way way way outside the box thinker. He believes and he does. Investors aren’t there yet. The short ones will probably take us higher in the near term. Musk needs to take us higher in 2018 with a huge production ramp.