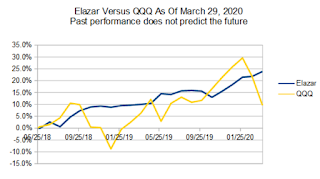 Here's some of the notes we told subscribers today. While we've been sharing this weekly publicly, subscribers receive this and other reports intraday & daily on tech, trading and markets including our world ranked stock picks, timing calls and live chat. To see our full comments along with specific stock picks click here.

The market had a huge bounce in the last four days up 16% on the $SPY from the low. I do think there's some follow through potential technically.

I would guess that follow through can continue into month/quarter end on Tuesday as people want to chase.

But here's the case count of the number of people affected so far.


Case growth slowed a touch. But the numbers are big and probably bigger than reported.

Italy is still increasing about 6,000 new cases a day.

I think when the case count slows down much more meaningfully we could get a rally. But since it's not I'm worried about another dip first.

When the case count slows more meaningfully though I think we get a nice rally.

That virus-slowdown rally can take us to mid-late summer. But then we'd need to see business improving late summer early fall. If business starts rebounding then markets can get back to new highs.

But if we hear then that business rebounds are more sluggish I think we take a big dip potentially in time for the elections. Because the Fed has used all its firepower that dip could be dangerous. That's again based on the 'if' business doesn't really respond in Q3.

Many buying now are assuming this is the low.

I think it's easy to see that we get through this virus in two - three months. But we need that to happen for last week's move to be merited.

Then we need businesses to bounce back in Q3 after the virus subsides for this month and a follow through move to be merited.

But we can't know that right now. So I think that requires a lot of assumptions. That can keep this market in whippy chase mode, which is bearish.

I think if traders trade with a lack of confidence that can set up more whippiness which ultimately shakes people out bearish.

Social distancing could take a little while for people to recover from.

After the event markets bounced but thereafter saw a continued drop.

That impact was non-financial related similar to this one. And this one is much more serious affecting many more.

This recovery could be more drawn out because the number of cases hasn't slowed yet.

Yes we have unlimited Fed stimulus but I'm not sold yet that it's going to have an affect to drive the economy. Yes, it will save businesses from going bankrupt but we can't know if it gets the economy back to ~3% GDP growth.

The other risk is inflation. We need to watch inflation numbers. Due to supply constraints prices have had support. If prices rise too fast the Fed would be forced to reverse their easy money and raise rates. That would also crash markets. Inflation is something that needs watching.

I'll be watching the charts. For now I think up short term. But I think it makes sense that we have another dip at some point after this move slows down. I see the meat of this move through month end and maybe some carry over later in the week.

But there's risk based on not knowing if this Fed liquidity will work to support economic growth. It's going to save a depression but will consumers and businesses bounce back and buy in Q3 and Q4.
That's they key that the market probably can't price in with confidence just yet. That's why I don't think traders buying the bounce will have confidence to support key levels. That is the recipe for volatility and risk.


All investments have many risks and can lose principal in the short and long term. The information provided is for information purposes only and can be wrong. By reading this you agree, understand and accept that you take upon yourself all responsibility for all of your investment decisions and to do your own work and hold Elazar Advisors, LLC, and their related parties harmless. All trades are hypothetical to show rating and opinion. All trades exclude relevant transaction costs. We have no holdings in the stocks mentioned unless otherwise noted.